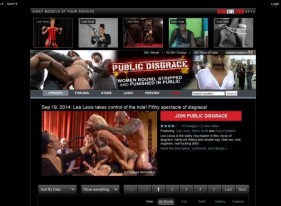 On PublicDisgrace you have over 303 high definition public sex videos that last up to 51 minutes which are filmed in locations such as crowded bars, a car wash, a pool table, barber shops, gyms, video stores, nightclubs, restaurants, supermarkets and outdoor location in Europe and America. In the hot videos there is usually a woman dominated by more than one man and Princess Donna, but there are times when other sexy gals do it too. These public disgrace videos can be streamed online in an embedded player and also downloaded with no limits in WMV and MP4 formats.

Unfortunately, there are not any bonus sites to come with a membership for Public Disgrace, but a cool site with behind-the-scenes footage that show you what really happens in the process of filming the hot and kinky scenes found on the sites from the Kink network.

The navigation on PublicDisgrace is ok, but it wouldn’t hurt to improve it. There are not so many details about the episodes. You browse the content by date, rating, comments and category. The fact that they update every week is an upside.